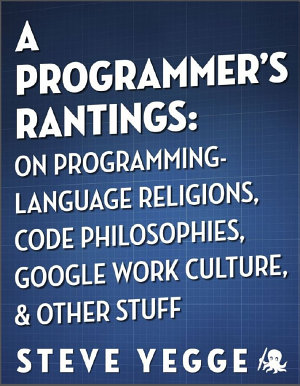 This book grew out of a lot of angst. Well, and wine. Put enough angst in me, and I’ll start ranting. Pour in some wine, and the rants get mean—and funny. I still go back and read these posts now and then, and I always laugh. I was so mean. My angst grew out of traveling different roads than most programmers. Those roads forced me to see the world differently. Now I see all sorts of patterns that many experienced programmers fail to see—because, well, to put it bluntly, they’re stuck in ruts. Over the past 25 years I’ve done a bunch of dramatically different types of programming, and I’ve also written far more code than any programmer ever should. The long roads I’ve traveled have basically given me a sixth sense. I see dead people. And it sucks. If you’re ever unlucky enough to acquire a dreadful sixth sense, there are really only two choices: you can be angry and depressed about it, or you can laugh about it. So I try to laugh. It’s hard, but I’m getting better at it. The wine helps. Practice helps, too. You need to get in the habit of laughing—at yourself, at others, at the crazy world we live in—or in time you’ll just stop laughing altogether. When I first started ranting, I was the ugly American, stomping around in my posts, and essentially yelling “What the hell is wrong with all you people?” But over the next ten years or so, I like to think I’ve grown into more of an amateur software anthropologist. I now take cultural relativism seriously, and I try hard not to judge people who think differently from me. Of course I don’t mind poking fun at them, because I don’t mind people poking fun at me. And ultimately I would like to convince undecided programmers to share my view of the programming world, because programming works best if everyone nearby does it the same way. So I’ll continue to argue that my view, which I’ve recently taken to calling “software liberalism,” is a perfectly valid and perhaps even preferable way to do a lot of software development. Converting everyone to be more liberal is doomed to fail, of course. But even so, I hope I can still help people in radically different software cultures to understand each other better. I’m going to keep ranting, because it appears to be the only way to make a message sink in to a very large audience. Some people still tell me that my blog posts are too long. They tell me I could have made my “point” in under a hundred words. I have noticed that this complaint comes most often from people who disagree with me. They’re really just saying they want less work to voice their disagreement. But even some folks who agree with me find the posts too long to carry their attention, and they complain too. They’re missing the point, though. The posts aren’t too long. You need a certain minimum “heft” to penetrate. Through years of trial and error, I’ve found that the best way to get a lot of people to listen to you is to tell them a story. And you can’t spin a good yarn without settling in and enjoying the ride. So that’s what this book is. It’s really a bunch of stories. Each might take the form of an article, essay, guide, rant, or occasionally a fiction tale. But behind the structure, each one of them is sharing a story. Even if you don’t always agree, I’m hoping you’ll at least find the stories entertaining and, with luck, sometimes even eye-opening. The guys at Hyperink chose which of my posts to include, by and large, and they also came up with the overall chapter organization. I made a couple of tweaks, but what you’re looking at is largely their vision of how to curate this stuff into a cohesive book. I think they did an admirable job. I hope you enjoy the journey as much as I did. Steve Yegge August 2012

Authors: Steve Yegge
Categories: Business & Economics
This book grew out of a lot of angst. Well, and wine. Put enough angst in me, and I’ll start ranting. Pour in some wine, and the rants get mean—and funny. I

Authors:
Categories:
Cincinnati Magazine taps into the DNA of the city, exploring shopping, dining, living, and culture and giving readers a ringside seat on the issues shaping the

Bulletin of the Atomic Scientists

Authors:
Categories:
The Bulletin of the Atomic Scientists is the premier public resource on scientific and technological developments that impact global security. Founded by Manhat

Authors: Donald Ervin Knuth
Categories: Computers
This anthology of essays from Donald Knuth, the inventor of literate programming includes early essays on related topics such as structured programming, as well